skip to main | skip to sidebar

being home in new york means a lot of things: the return of my generally embedded (inherited) old queens accent, frequent binge-drinking for binge-drinking's sake, pretending i'm going to make a lot of shitty art with spray paint and glitter, etc.
mostly, i guess i forgot to anticipate that most of my friends, except for my closest bro, either don't know about or don't really take my newfound faggy dudeness seriously. well, i guess the ones who know aren't necessarily not taking it seriously, but maybe don't realize how involved this change is for me. i understand that having known me for a really long time, it might be difficult and awkward to process my gender as something else, and i haven't exactly had the whole 'i'm-enforcing-new-pronouns' conversation, but it's mostly out of fear and insecurity, but, honestly, i haven't identified as a lesbian for a really long time, so i can't forgive those slips. the thing is, i don't know how most of my friends would take it. i guess the fact that i haven't had a gender crisis since birth, it means i'm not coming from a place of sincerity. i never really had that window, though. i was raised as a girl and ran with it. it was probably the only way my family would've been able to deal with highly involved madonna, bette midler, and barbra streisand obsessions anyway. let's face it: i'm mostly a walking faggot stereotype. aside from the fucking girls thing: an anomaly. i mean, i can't really say i've had a huge stake in being a girl, except for my stint as a radical lesbian separatist. it was handed to me, and maybe i indulged in it for a few years (kindergarten to third grade? minus forth, then fifth? lost it in sixth... then from seventh on, i was really just an amorphous blob of non-gendered sadness and angst).
i guess i won't breach the subject with some, especially my upright straight friends: just not worth it. it's just awkward being in a whole other environment where people i love sort of know what's up, really respects it and values that part of me, and then coming here, being around people i love and having that not be the case. god, but the she's are so hard coming from a friend. it hurts so bad, even though i know it's not intentional. and then, having my friends interacting with each other, and they're all using different pronouns-- "person a: what did she do? person b: he pulled my hair! person a: oh, she's feral!"-- it makes it all seem so outside of me. it's so strange to sit back and watch.
hmm, well, mostly, i feel like a lark. what a joke, folks! i'm trans now! am i allowed to say that, or what? and i feel like i'm embarking on this a little bit by myself. i'm going to start up on t when i get back to north carolina. i'm really scared. shots are scary. regular shots? scary. but, also of what it means in the longrun. i mean, i've established that when i come back home after the effects are realized, i'll just pretend the bodily differences are a result of new exercise methods, maybe my voice won't be so different, and i'll just shave if my face amasses anything at all. or, it's all the fucking hormones in all the food we eat, mom! duh!
and i guess my friends will just have to deal with it. maybe then they'll stop calling me a dyke. i guess i'm afraid of shutting out my whole past, or having it dissolve in front of me. what an endeavor. mostly, it'll probably be okay. no big deal. right?

Posted by Exposing Our Privates at 12:57 AM No comments:

twice the sir you ever were, or mistaken for a boy at two airports

got called sir twice en route to new york city. once in asheville by security guy, then in georgia by credit-card-pushing lady. thumbs up. brosemary says they must've been wondering where my mother was... like home alone 2.
already spending too much of my money. vibrators and a new coat-- but these are basic necessities, right? and i got a friend discount at babeland from someone who's more of a vague annoyance than anything else.
hot pomegranate cider with amber rum, eating tacos in sovereign bank for warmth after some martinis at the colombian hipster bar. discussions of encroaching dyke drama over pizza and more rum. people apparently still have faith in everlasting love, which is strange. i think bro-mo and me are the only ones who are skeptical.
by the second week of the new year, rosemary and i will have gotten buddy tattoos and you'll just have to wait to see them.
i saw my therapist on the street, but was too floored to know what to do, and by the time she passed it was too late. i mean, it's not all on me, if she recognized me first, she should've said something. i was in my head-- that's how i am on the street.
i have a whole box of yoohoo squeezeboxes at home, some chocolaty star cookies, and a bottle of cheap pink wine in the fridge. it's all good. whitecatscoutcat purring on my leg in the night.
paul baribeau provides the perfect soundtrack to my minor loneliness and wimpy beta-maleness.
Posted by Exposing Our Privates at 3:05 PM No comments: 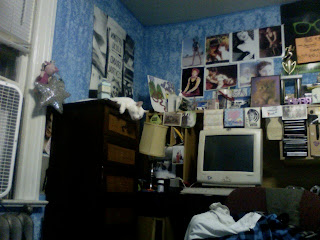 How many cats can you spot in the homo's room?

Posted by Exposing Our Privates at 7:22 PM No comments: 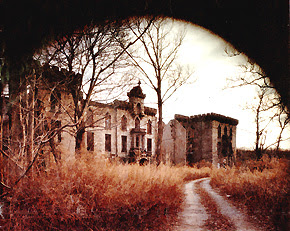 i've been excavating my entombed interests in the paranormal and urban decay lately (which, at times, go hand-in-hand). in-so-doing, i've been skulking around the internet, looking for more information, some of which i'd forgotten, about the various institutions that once existed on roosevelt island. roosevelt island has a very dramatic history of varying states of quarantine, it having at first been known as blackwell island, inhabiting a sprawling penitentiary that inmates with mostly misdemeanor charges. a lot of the inmates, however, remained in penitentiary housing (obviously not in imprisonment) upon release due to how extremely poor most of them were. most other institutions that sprung up after the existing penitentiary were constructed completely out of prison labor (note the interesting link between punishment and existing political and economic systems, i.e. capitalism influencing penalty methods and redress rendered through commercial productivity). this includes the octagon (lunatic asylum for women) and the renwick smallpox hospital for incurables. both locations, oddly enough, were also staffed by many inmates. the octagon went under investigation a number of times in the 1800s for instances of abuse and neglect, and a large majority of its patients were women whose husbands admitted basically out of boredom. nellie bly published a very famous exposé, at the time, which later turned into a full-on book, about the excessive abuses of the hospital, after feigning mental instability and becoming admitted. the facilities had in common the overwhelming poverty of their inhabitants and the inattentive treatment received on all fronts to all housed on the island.

i've had a difficult time unearthing specific gruesome grievances in relation to any of the facilities, but knowing the state of the mental health system during the 19th century is a bit elucidating. the octagon's been restored into an excessively expensive apartment complex and many of the original buildings like the penitentiary, alms housing, etc have been destroyed. the smallpox hospital lies in ruin at the one end of the island, looming over the water in all its gutted gothic decay. i once found an image online of a flier that was posted on the fence surrounding the ruins with a mutilated and emaciated body on it as well as an ominous demand for acknowledgement of the ills done there. i haven't been able to come across that again.

when i broke into the renwick ruins twice a few years back, there was a lot of eerie residual energy, also some cold spots, and definite electronic interference. mostly i experienced a melancholic feeling, also some aggravated claustrophobia. when we were walking away from the hospital it almost felt like we were being pulled back, as if there were something stuck behind us reaching a hand out to be released, too. my cell phone, which had complete service and battery just a few feet away from the hospital kept shutting off and the battery died. my friend's battery also died and her service went out completely. once we stepped about ten feet away from the ruins, our batteries were full again and service restored. we also heard a bell ringing at one point.

aside from the possible paranormal potential of the place, it was just a riveting location to explore. seeing overturned bed springs, tables, and half-tiled walls, with very little foundation remaining on the inside aside from the overall frame... it's interesting to note what remains.
Posted by Exposing Our Privates at 4:18 AM 1 comment: 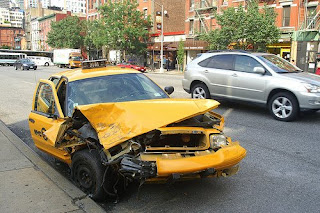 upon exiting the lirr station at long beach on saturday, on the way to visit a friend, i had to press through the throngs of tangerine-skinned beach enthusiasts to get to a taxi. having been slightly annoyed at the "sweetie" that proceeded the dispatcher's directions to the cab i'd be taking, i just sat back in the mini-van and waited to depart. an irritatingly enthusiastic guy sat next to me and an amiable, typically-long-island woman sat in the front. we proceeded toward our respective destinations, leaving the ditzy, chipper guy off first. as we approached my destination, i realized the driver had no intention of stopping and i watched my friends whiz by, their building number, which was clearly-articulated before, slipping from my vision. i phoned my friend to tell her i just passed her, thinking this dude's going to drop the other woman off and wheel around. as i'm talking to her, i overhear the woman say, "oh, no, i think it was him. he was going to shore road." i hung up and the driver corrected her with exaggerated emphasis, "oh, SHE wanted shore road." the woman turned around, held her hand up to her mouth in embarrassment and apologized profusely, but i was really more irritated with the driver, because i found it really irrelevant for him to be so blatant about it. i was actually quite excited that i passed because i'm generally hoping to be sort of enigmatic in the gender department, and despite my breasts being purposefully pasted to my chest, to my dismay, i'm usually perceived "correctly," even if i mightn't be yr run-of-the-mill young lady. i know this because of the abundant "sweeties," "ma'ams," and "honeys" i get.
then the driver said, "you were so quiet back there, i forgot you were here." to which i wanted to respond, "well, maybe i should just FORGET to pay you."
anyway, getting closer to the middle everyday, i guess.
Posted by Exposing Our Privates at 2:07 AM No comments:

to my own dismay, i can now call myself a blogger.
summer, being a time wrought with boredom and humidity that instigates reclusion, seems the perfect time to pursue something like this, although i can't promise any regular upkeep because consistency doesn't happen to be one of my character traits (unlike impetuousness and bored-easily-ness).

i don't have any pressing irritations to relay at the moment, so i'll leave you with a photo of me, holding something i made: 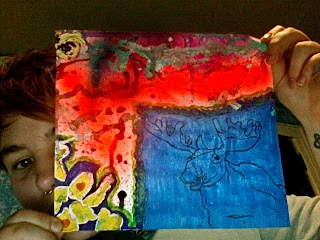